As a pioneer tree species the birch contributes to a quick reforestation and reclamation of forest borders. Located in the pioneer crop it is an important precursor by stimulating the humus accumulation and reducing late frost risks. In furniture industry and particularly in producing veneers birch wood is gaining in importance due to its light colour and silky lustre.

Already in the year 1953 a progeny testing with two years old birches was established by he former Forestry Field Office Escherode. In 1980 mother plants were being selected for the purpose of micropropagation and the subsequent testing. The best progeny regarding to stem form and growth performance originated from the crossbreed Betula platyphylla var. japonica x Betula pendula.

At the age of 30 years the best 20 individuals were selected, established in vitro cultures at the Northwest German Forest Research Institute (Nordwestdeutsche Forstliche Versuchsanstalt, NW-FVA) tissue culture laboratory and reproduced. In spring 1989 clone testings were established at the Lower Saxon Forestry Field Offices Neuhaus and Elm. Another area was generated in autumn 1990 at the Forestry Field Office Dannenberg. 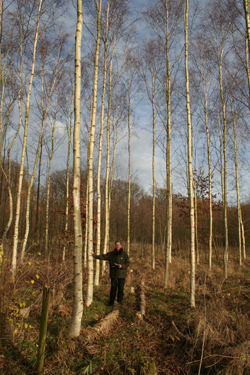 As proved by the data collected by the NW-FVA in Escherode in comparison to seedlings in vitro reproduced and selected Hybrid Birches show an excellent growth. Particularly regarding the stem form character the advantages of selected plant material become apparent (figure). 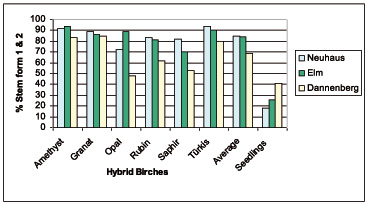 In clone testing at the Forestry Field Office Dannenberg the six micropropagated clones
showed to be significantly superior to the hybrid seedlings in breast-height diameter, height and loss (figure). 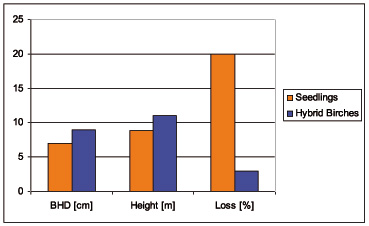 As the findings show the propagation of in vitro reproduced Hybrid Birch clones is a promising alternative to seedlings. According to NW-FVA information the birches yield after 25 years 90 solid cubic metre/ha, which is almost twice the amount compared with the traditional Silver Birch.

The mixture of clones consists of at least 5 Hybrid Birch clones. 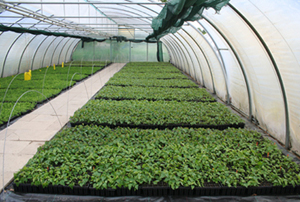 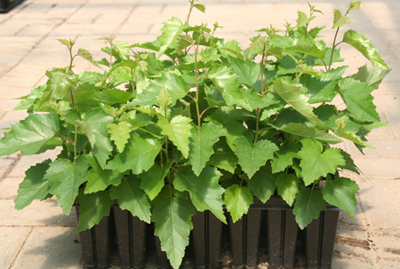 Each plant is being inoculated with symbiontic mycorrhiza fungi during the phase of hardening in order to enable proliferation at the natural habitat.

Your planning should arrange for the fostering of 100 to 150 future plus trees/ha. We therefore recommend to spread the high-class plant material evenly throughout the area using quantities of 400 to 900 trees/ha and integrating filler. As final quantity of plants 1600 plants/ha (plant spacing 2.5 x 2.5 m) is recommended.
Birch may as well be admixed for initial forestation. Due to its fast-growing canopy it provides an excellent frost protection, inducing yield increment and structural improvement.
The same applies to its planting near roadsides and for open natural regeneration.
Provided that a good water supply is guaranteed, even on meagre sandy sites birch exhibits high performance ability. But the same applies here: Best yields will be realised on humus-rich soils. 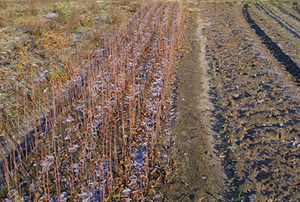 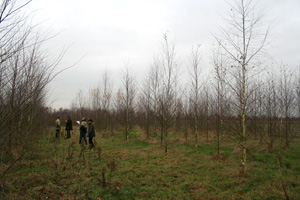 Hybrid Birches are not subject to FoVG, because they are actually not registered in the list of tree species and artificial hybrids which is subject to directive 199/105/EG (annex to § 2 No. 1).